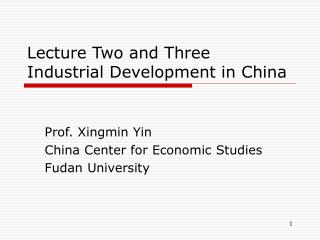 the development of the chinese patent law through its two amendments - 2. introduction . 3. evolution of china patent

Development of China - An Economy in Transition - . kennyzhang@asiapacific.ca. 3 purposes. to know china china matters to

TAIWAN’S INDUSTRIAL DEVELOPMENT - . distribution of industrial production by ownership. all figures in %. spending on

ICT development report of China - . the ministry of science and technology of the people’s republic of china. 1. 5. t

The Industrial Revolution - . industrial diffusion. how do industrial regionalization, uneven development, and