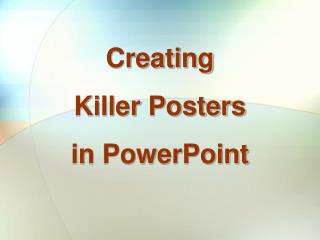 Creating Killer Posters in PowerPoint. Poster Definition. A large document that succinctly communicates the results of research both graphically and in print. Purpose. The ideal poster is designed to... provide a brief overview of your work initiate discussion Creating “Killer” Videos - . tips and tricks for directors. basics of visual storytelling. always think about what

Creating maps in MS PowerPoint - . – standards and templates –. september 2010. the most relevant standards.

Tips for Killer PowerPoint Presentations - . nika plevnik. guides. how not to use the ppt: life after death by powerpoint

Creating TEI Questions in PowerPoint - . the first, faster way. select view&gt;slide master click on one of the boxes