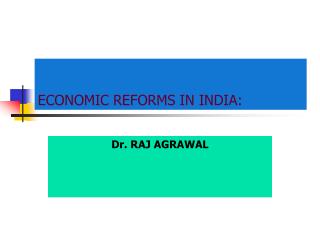 ECONOMIC REFORMS IN INDIA:. Dr. RAJ AGRAWAL. Period 1947- 1990. The historical discontinuity after independence The Plan strategy A nation building exercise The experiment with socialism. The Planning era. A Critical Assessment:: A rate of growth of average 3.2 per cent Reforms, Revolutions and War - . reforms in the british empire. 1. social and political reforms. reform act of 1832 prior

Reforms, Revolutions and War - . reforms in the british empire. 1. social and political reforms. reform act of 1832 prior

The Liberal Reforms: Why were they introduced? - . “merely a response to the threat of the labour party” how

Chapter 12: Economic Geography - . developed by joe naumann. economic systems are an important part of any culture.

Eyewitness Identification Evidence: Procedural Reforms - . presentation to the california commission for the fair

The Bourbon Reforms - . and the strains of empire. late colonial mexico. population and demographics premodern vs.

Reforms and macroeconomic policy under Gorbachev (1985-91) - . overview of gorbachev reforms soviet economy on the eve of

The Labour Welfare Reforms Essay - . content structure debate historiography. how effective were the social reforms of