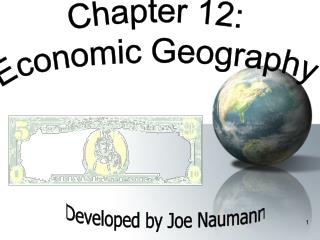 Chapter 12: Economic Geography . Developed by Joe Naumann. Economic systems are an important part of any culture. Every society (culture) must answer the basic economic questions : What to produce How to produce it Who will get what is produced Cultural influences on the economic system Global Geography 12 Chapter 1 - . a pale blue dot?. let’s talk about earth. “it is a curious feature of our existence