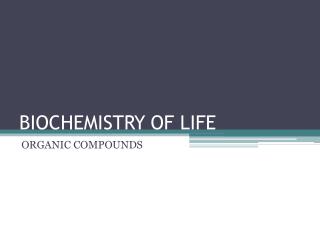 BIOCHEMISTRY OF LIFE. ORGANIC COMPOUNDS. Water. Water is a very unusual substance and has some very important properties; it has a very high melting and boiling point (0 o C and 100 o C), it has a high viscosity, it’s solid form is less dense than the liquid form and has high surface tension. BIOCHEMISTRY CHEMISTRY OF LIFE - . biochemistry. the science concerned with the chemical basis of life, it deals with

BIOCHEMISTRY CHEMISTRY OF LIFE - . buffers. maintanence of normal ph. there are three natural systems in our body

BIOCHEMISTRY THE CHEMISTRY OF LIFE - . the scientific study of the chemical substances, processes, and reactions that

Introduction to Life and Biochemistry - . 8 characteristics of life. what makes something alive or living? brainstorm

Biochemistry of liver - . alice skoumalová. the liver-introduction importance in intermediary metabolism and in the

Biochemistry of Diabetes - . bruno sopko based on presentations of alice sko u malová. content. regulation of