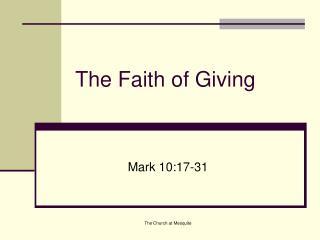 The Faith of Giving. Mark 10:17-31. Recap: Abounding In Grace. Grace: a disposition created by the Spirit: a type of extreme kindness The Benefits of Giving - . an expository study on 2 corinthians, chapter 9. excel in giving. a) they gave despite their

The Art of Giving - . the art of giving. “rivers do not drink their own water, nor do tree eat their own fruit, nor do

The Joy of giving - . 2 corinthians 9 7 … god loves a cheerful giver. giving and compassion go together. luke 10 the

The Discipline Of Faith - . “choosing your yoke”. jeremiah

THE SHIELD OF FAITH - . (eph. 6:16) “above all, taking in shield of faith with which you will b eable to quench the

Foundations of The Faith - . the return of jesus. 1 thessalonians 1 corinthians revelation. eschatology: the return of

Basics of the Faith - . central beliefs and practices. a brief review. creation god created out of nothing (ex nihilo)

The Age of Faith - . the church. the catholic church was the most powerful organization in western europe why? the role