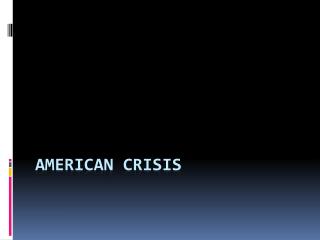 American Crisis. 1776. 1776 was not a good year for the American cause 6 weeks after the Declaration of Independence was signed, Continental Army was defeated at Long Island George Washington was forced to surrender New York City Native American Cultures in Crisis - . chapter 13 section 1. i the culture of the plains indians a. the importance of the

The Crisis in Native American Health - . by kyra rogers. question: what is the unhealthiest group in the united states?.

from “The American Crisis: Number 1” - . by thomas paine. an army of principles can penetrate where an army of

Crisis? What Crisis? - . the washington state legislature has formed a task force to develop a new system for funding

A Tale of American Water Crisis - By Brian Marshall - I am brian marshall, the owner of pherian llc situated in tampa,

Rape Crisis in Crisis? - . dr helen jones manchester metropolitan university h.jones@mmu.ac.uk. who, what, why, when?.