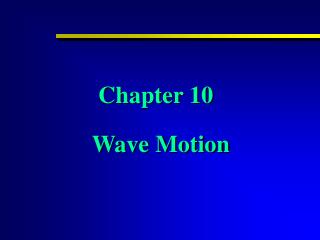 Chapter 3 PROJECTILE MOTION - . how does a cannonball fly?. or: did you realize that gravity and wind resistance effect

Chapter 14: Wave Motion - . mechanical waves. are disturbances that travel through some material or substance called

A longitudinal wave is: - . a wave where the particle oscillation is perpendicular to the direction of wave motion a wave

FLASH CARDS Ocean Motion - . wave. movement of energy though a body of water. click for term. trough. lowest point of a

Chapter 16 - . wave motion. quick quiz 16.1. in a long line of people waiting to buy tickets, the first person leaves and

Waves - . chapter 11 section 1. what is a wave ?. a wave is a repeating disturbance or movement that transfers energy