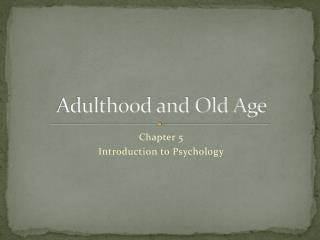 Adulthood and Old Age. Chapter 5 Introduction to Psychology. What is Adulthood?. the period of time in your life after your physical growth has stopped and you are fully developed the state (and responsibilities) of a person who has attained maturity. Erik Erikson’s Theory.

Physical and Cognitive Development in Late Adulthood Chapter Sixteen - . i. old age today. a. the graying of the

Adulthood and Old Age - . chapter 5. adulthood . what is adulthood like? period when opposite factors affect lives can be

Adulthood and Old Age - . “empty nest syndrome”. when a significant person in an older person’s life leaves many

Stages of Life: Infancy to Late Adulthood - . do now:. on a piece of paper, finish the following statements with at

Adulthood - . physical changes. young adults are at their physical peak between the ages of 18-30. the process of

Adulthood - . do now: write a response to the following statement “i’ll know i’m really an adult when …..”.