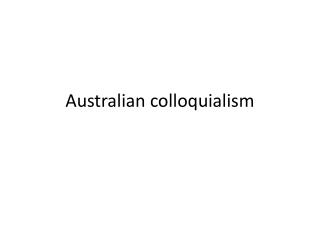 Australian Communities Report: A Demographic & Social Analysis of Religion & the Church in Australia - This

The Meaning of Vulgarities - The quality or state of not having good taste, manners, politeness, etc. called vulgarity. Gen Y Colloquialisms - . www.jaqsesllessons.com. *to build up your vocabulary of common english colloquialisms used by

Spitfire - . spitfire. is it really an accurate scale model

the eureka stockade/gold rush - . gold rush. the gold rush started in the 1650’s. bendigo is built over a gold mind.

Waltzing Matilda - . new words. billabong  - a small body of still water near a river (an ox-bow lake). billy  - a tin

LIFE CYCLE - . bruce dawe. context – australian rules football. originated in melbourne in 1858. has been played in

Teen Speak - The language of teens. teen speak. this term is all about analysing teenagers in both a modern day and