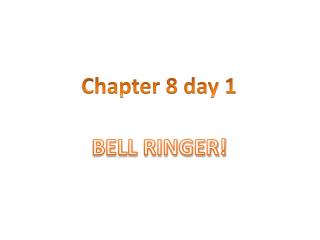 8-1 day 2 - . objective: i will investigate the measures of the interior and exterior angles of polygons. use the formula

Lesson 8 Day 1 - . question of the day. how do you communicate with others? think of a message you can communicate

Chapter 8 .1 - . what is credit?. using consumer credit wisely. credit is an arrangement to receive cash, goods, or

1/19/11 Day 8 - . topic: conservation of momentum lab objective: i will calculate momentum before and after an elastic

Week 8 Activator Day 1 - . explain how or when you would use each of these transitions in a paragraph: in fact, (use to

Wednesday , 8/22 Day 1 - Science starters sheet. 1. please have these items on your desk. science