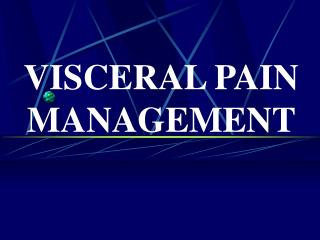 VISCERAL PAIN MANAGEMENT. Visceral pain treatment. It is unlikely that a single analgesic or targeted agent will significantly reduce most visceral pains since multiple neurotransmitters, channels, and receptors are responsible for this type of pain. Pain Management - . paul rozynes, m.d. medical director vitas broward. pain—definition is based upon our own

Pain Management - . what is it? lisa m. lackner, rn, msn. pain…. what is the real definition of pain? and what is pain

Pain management - . learning objectives. at the end of the workshop you will be able to: consider the important

PAIN MANAGEMENT - . analgesics for pain. pain is commonly one of the reasons on why patient always seek medical

Pain Management - . pain management. the management of pain is important not just for humanitarian also to improve and

Pain Management - . pain is . “ an unpleasant sensory and emotional experience associated with actual or potential

Visceral Muscle - . how is the gut organized