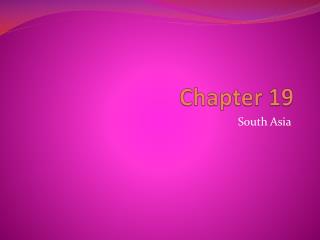 Chapter 19. South Asia. South Asia. Separated from Asia by the Himalayas in the North Bigger than a peninsula and smaller than a continent– called a Subcontinent Has strongest Monsoon winds in the world- due to Himalayas India is the dominant country and major influence in the area