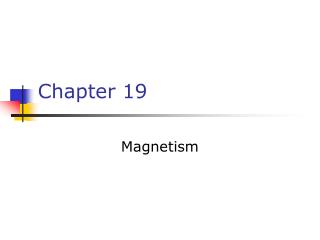 Chapter 19. Magnetism. Magnets. Poles of a magnet are the ends where objects are most strongly attracted Two poles, called north and south Like poles repel each other and unlike poles attract each other Similar to electric charges Magnetic poles cannot be isolated