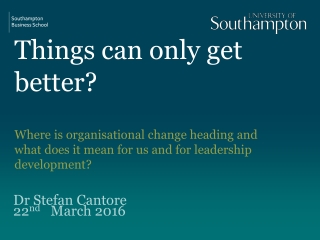 Things can only get better?. Where is organisational change heading and what does it mean for us and for leadership development?. Dr Stefan Cantore 22 nd March 2016. D.Ream. https://www.youtube.com/watch?v=XTWm0s7ZwDY. Conversation. What role does optimism play in your practice? 43 Things: The Library Edition - . why is this presentation called 43 things? it's based on the popular social networking

Things that a lack of health care access cause: - Things that resulted from the bretton woods conference:. things that

Intro to BIOLOGY - . bio= life logy= study of. what are the characteristics of living things?. all living things have an

All about me! - . friends family members beliefs things you say things you do habits things that are good about you

Gratitude - . feeling appreciative and thankful for the good things that others do for us, being willing to recognise and

Fed up with the status quo? The way things are isn’t the way things have to be. - Our mission: to guide those far from

Living Things - . how do we know is something is ‘living’?. all living things are characterised as being able to do

With GOD All Things Are Possible - . matthew 19:26 but jesus beheld them, and said unto them, with men this is

Chapter 14 - . history of life pg. 278. biogenesis- states that all living things come from other living things