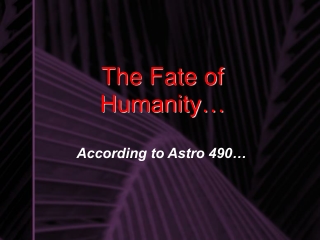 PEAK OIL AND THE FATE OF HUMANITY Chapter 1 – Oil, the Lifeblood of a Technological Civilization By Robert Bériault

PEAK OIL AND THE FATE OF HUMANITY Chapter 9A – What We Can Do at the Personal Level By Robert Bériault - . what can

Fate vs. Luck - . this web quest is created by: ansha clement.

Evolution of Humanity - . how do we determine “progress” and “modernity”?. remember darwin?. evolution – the