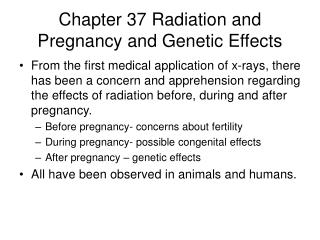 Chapter 37 Radiation and Pregnancy and Genetic Effects. From the first medical application of x-rays, there has been a concern and apprehension regarding the effects of radiation before, during and after pregnancy. Before pregnancy- concerns about fertility REDUCING THE RISK OF THROMBOSIS AND EMBOLISM DURING PREGNANCY AND THE PUERPERIUM - . dr noorzadeh fellowship

Maternal Changes with Pregnancy - . pregnancy is a period of adaptation for:. the needs of the fetus meeting the stress