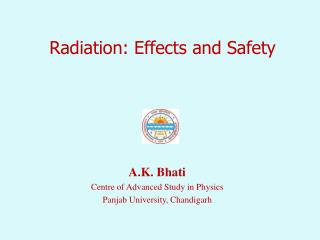 Radiation: Effects and Safety. A.K. Bhati Centre of Advanced Study in Physics Panjab University, Chandigarh. What is Radiation?. Radiation is the process of emitting energy through a medium or space in the form of waves or particles. Radiation. Ionizing. Non-ionizing.