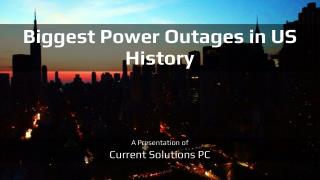 Directly or indirectly, all aspects of life in today’s technologically advanced world is connected with electricity. Without electricity, there is no life, no business or no safety. Take a look at some of the notable power outages in the history of United States. Feminist Theories: Gender, Power, and Crime - . the rise of feminist criminology. for much of its history, criminology

What is the biggest organism ever? - . apatosaurus ?. blue whale?. coast redwood?. none of the above – it’s a fungus.

Pursuit of Power - . chapter 14. power of kings: absolute or restrained. what is the difference between an absolutist and

Honors US History - . cause &amp; effect…. rise of military dictators during 30’s, us depression dictators grew