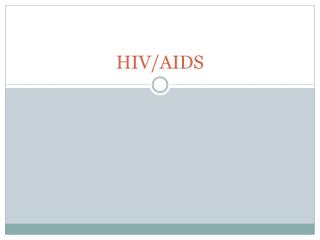 AIDS BY DR BASHIR SOPORE KASHMIR - The most important way to stop hiv/aids is education. people can get hiv from sex and

20 Years of the HIV/AIDS Epidemic in the Caribbean: - A summary dr b.camara, medical epidemiologist, paho/who estimate

Infectious Diseases in Healthcare Focusing on HIV/ AIDS - . sm ii. objective. the purpose of this unit is to increase

HIV and AIDS - . what are hiv and aids? hiv is the human immunodeficiency virus. it is the virus that can lead to

The Other Sustainability Challenge : Revitalizing Reporting on HIV and AIDS - . reporting workshop. what is