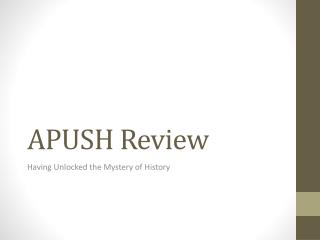 APUSH Review . Having Unlocked the Mystery of History. New World Beginnings, 33,000 B.C.-A.D. 1769. The Shaping of North America. Recorded history began 6,000 years ago. It was 500 years ago that Europeans set foot on the Americas to begin colonization