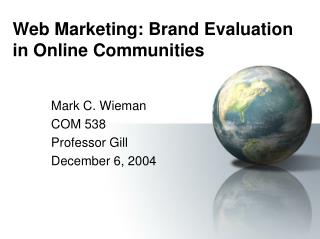 Marketing an Offline Business in an Online World - . by kim fenolio , director of marketing and online development for

What Is A Brand? - . “a brand is a name, term, sign, symbol, or design, or a combination of them, intended to identify

Attitudes - . expressions of inner feelings that reflect whether a person is favorably or unfavorably predisposed to some

Direct and Online Marketing - . chapter 14. previewing the concepts. direct marketing and its benefits database in direct