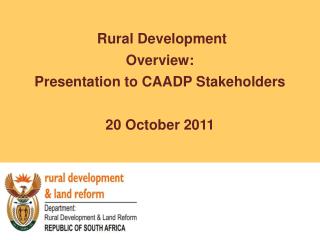 Getting Funded in a Gates/Buffet World - . presented by: partnership for rural improvement (a community development

Poverty and Inequality Among Rural Households in Nigeria - . presented at the aerc dissemination workshop held at uneca

MINISTRY OF AGRICULTURE AND RURAL DEVELOPMENT DEPARTMENT OF LIVESTOCK - . status of livestock in 2010, trend for