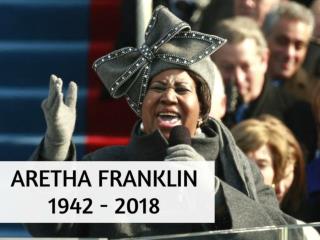 Aretha Franklin, the long-reigning Queen of Soul, dies at age 76. Old relic photos during WWII remastered in High Definition - . operator building on a b-25 north american in 1942. b-25's

Ben Franklin Stole the Lightning - . genre: biography -a story about a life of a real person written by someone else.

1960 Culture - . by sam goforth. music. elvis presley returned to music after joining the us army and was one of the top

Roslyn Franklin - . http://www.sdsc.edu/sciencewomen/franklin.html. how would you go about determining the mechanism of

Analyze the impact Franklin D. Roosevelt had on the American people after becoming President. - 22.1 objectives. analyze

Aruba - . aruba’s flag. blue represents the sea that surrounds aruba yellow is the color of abundance, representing the