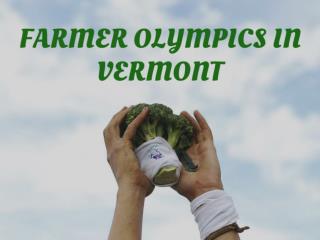 With the world’s attention focused on the Olympic Games in Brazil, a decidedly different type of competition was held in a small corner of New England, as farmers took to the field for the second annual Farmer Olympics in Vershire, Vt. After taking part in warm-up events that included a hay bale toss, the crowd gathered for an opening ceremony where a quartet performed the Olympic theme song on kazoo. When the competition began, 60 farmers sprinted up a hill, empty bins and shovels in hand, for the manure relay. The event was sponsored by the Northeast Organic Farming Association of Vermont. In the end it was a team from Cedar Circle Farm in East Stepford who took the gold.

The Olympics as Risk Governance - . will jennings university of southampton. governance and the olympics why risk

The amazing Olympics - . this power-point is about the olympics. there is going to be information on what sports are

San Francisco for the Olympics! - . 2020. s an francisco would be a great place for the olympics! there’s plenty to do,

Germany at the Olympics - . modern day first olympics in athens, greece ( 1896 ). german athletes have taken part in most

The Greek Olympics - . learning targets. i will… develop an understanding of one of five greek city-states and their

Vermont Blizzards: Snow Removal then and now - . it is clear that snow has always been a part of the landscape in