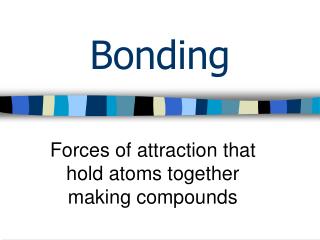 Bonding. Forces of attraction that hold atoms together making compounds. Chemical symbols. Symbols are used to represent elements Either one capital letter, or a capital letter with a lower case letter Know names and symbols of elements: 1 – 30, plus

Lecture 15 February 8, 2010 Ionic bonding and oxide crystals - . nature of the chemical bond with applications to

Chapter 6 -Chemical Bonding - . batrachotoxin. a steroid alkaloid derived from skin secretions of the phyllobates and

Blended Families - . blending families: a guide for stepparents. tips for avoiding problems and advice for healthy