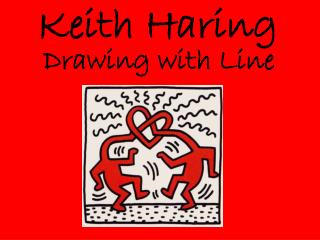 Keith Haring - . haring website : www.haringkids.com “my contribution to the world is my ability to draw. i will draw

Keith Haring - . drawing with line. keith haring was born may 4, 1958 in kuztown pennsylvania. growing up he wasn’t

Keith Haring - . who is keith haring?. street artist who made work in the 1980s created artwork with gesture figures

Keith Haring Posters - . you will be working in pairs to create posters using similar artistic techniques of keith

KEITH HARING ARTIST - . all students must; gain knowledge and insight into the life and work of the artist keith haring.

Keith Haring Message Poster - . is this art?. at first glance, keith haring’s drawings look like cartoons…. is this