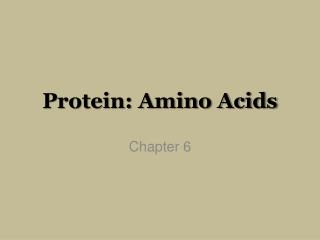 Protein: Amino Acids - . objectives. after reading chapter 5, class discussion and activities you will be able to:

Protein and Amino Acids - . equine nutrition. introduction. protein is a major component of most body tissues including:

AMINO ACIDS - . ikeda in 1908, working on the flavouring component in kelps discovered glutamic acid (l-glutamate) after

Amino Acids - . characteristics and structures. amino acids. there are 20 amino acids derived from proteins. while there