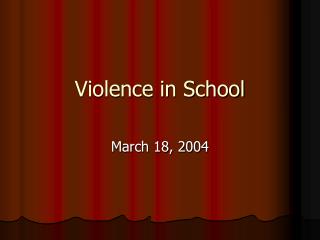 SCHOOL VIOLENCE - . &lt; 1% of all homicides among school-aged children (5-19) occur in or around school grounds or

School Violence - . violence. the act of purposefully hurting someone. violence: an expression or release of feelings

School violence - . what is wrong with the kids nowadays?. why violence begin?. they want to get famous. it’s cool,

School Violence - . the majority of injuries at school are unintentional, not

SCHOOL VIOLENCE - . 1% of all homicides among school-aged children (5-19) occur in or around school grounds or on the way

Preventing School Violence - . what is my role as an educator?. introduction. background and history. two perspectives:

COMBATING SCHOOL VIOLENCE - . an ongoing activity for the teacher training centre of

Violence and Aggression in High School - Explosion of violence. between february 1996 and december 1999 there were 17