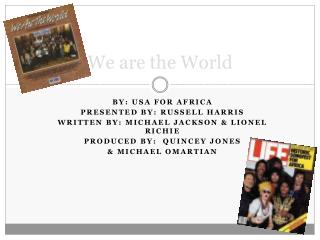 We are the World. By: USA for Africa Presented by: Russell Harris Written By: Michael Jackson & Lionel Richie Produced by: quincey jones & michael omartian. Lyrics.

We Are the World - . delineated. to trace the outline of; sketch or trace in outline; represent pictorially: he

We are the world

WE ARE THE WORLD - . multicultural week curriculum a unified approach www.wearetheworld.pbwiki.com. a communal focus.

We are the world - . what is global competency ?

Where in the world are we - . mohamed basyouni 8a. image. information. its in the the islamic culture they use special

Where in the World Are We? - . how can you find your location?. absolute location: exact spot on the planet where

Where in the world are we? - . tamadur almannai. graffiti

The world is changing, so are we ! - . agenda. overview: the bio-pharma industry major challenges for developers genzyme:

Why in the world are we here? - . dave brereton rbc december 30, 2012. science. to survive and to reproduce to contribute

What in the world are we doing? - . we are glad you asked…. the evangelical covenant church of canada is working

We Are the World 25 for Haiti - . by: lionel richie and micheal jackson. song lyrics

Are We the Cooperative We Think We Are? - . capitalizing on the international year of cooperatives. annual stockholders

We are the - . tigers!. hear us. roar!. tuesday, 09-09-14. kc student athletic trainers are accepting applications for

Oregon Forestry Where in the World are we Going? - . presented to the oregon board of forestry july 19, 2002 tillamook,

MICHAEL JACKSON: we are the world - USA for Africa