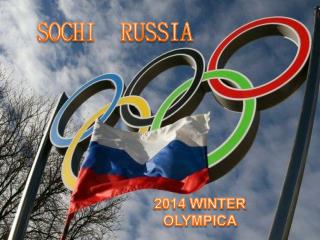 SOCHI RUSSIA. 2014 WINTER OLYMPICA. Sochi Beach. Sochi is the largest resort in Russia. Located near the border with Georgia .From the north-west of the city is surrounded by mountains Caucasus. The metropolitan area extends along the shores of the Black Sea, for 91 miles. Summer theater in Sochi - Sochi is the oldest spa in russia. located in the kraï of krasnodar near the border with

The Sochi Winter Olympics - . kwl. write what you already know about the olympics and what you want to know?