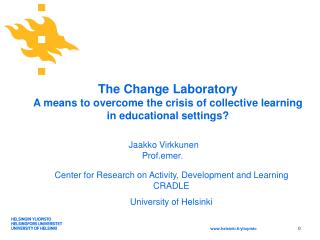 The Change Laboratory A means to overcome the crisis of collective learning in educational settings?. Jaakko Virkkunen Prof.emer. Center for Research on Activity, Development and Learning CRADLE University of Helsinki. The outline of the presentation. “A company devoted to change Through organization” - . what is start your collective? where we are located? what we

NYREN As A Driver of Collective Impact: A Preliminary Analysis - . susan sturm and leah pope center for institutional and

Universal design FOR learning - . a set of principles for curriculum development that give all individuals equal

Crisis in the luxury business in Japan - . the mc kinley team. 12/16/09. summary. luxury in japan the crisis in this

CRISIS AND CHANGE IN EUROPE WHAT IT MEANS FOR U.S. BUSINESS - . presented by kris bledowski economist and council

Using Crisis as an Opportunity to Change - . do you see an opportunity in crisis?. you have been in circumstances that

CIVILIZATIONS IN CRISIS, CONFLICT AND CHANGE - . chapter 31. eurasia civilizations in crisis. the problem for the middle