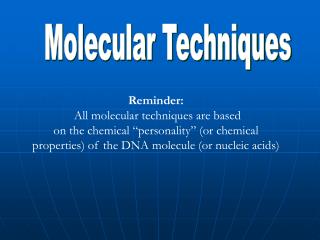 Molecular Techniques. Reminder: All molecular techniques are based on the chemical “personality” (or chemical properties) of the DNA molecule (or nucleic acids). Studies of cell Fractionation Purification/ Identification Structure/ Function. Proteins. Carbohydrates. Lipids. PHASES OF MATTER AND KINETIC MOLECULAR THEORY - . one of the main assumptions of the kinetic molecular theory of gases is