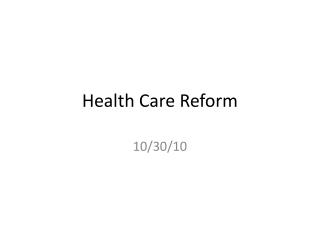 FROM VOLUME TO VALUE: Better Ways to Pay for Health Care, and How to Get There - . harold d. miller executive director

New Models for Care Delivery in the Reform Era 9.27.2012 - . agenda. key challenges of the reform era hospital and

Affordable Care Act 101 : What it means for you and your business - Health care reform series. affordable care act 101