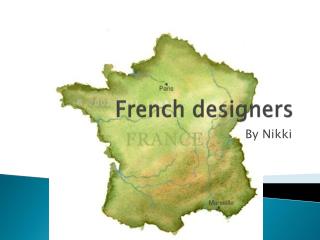 French Love Art - Vaastu Designers - French love art, and so their homes are filled with exquisite art pieces. choose a

Designers - . edexcel a2 theory. characteristics in terms of design styles, philosophy and influences on design culture

French - . by: jamie courtier. flag . the flag represent this country. it is backwards from are flag. . type of

French - 2. french in the world. french is a romance

French - Revolution. french. france in the late 18 th century was aristocratic with some remaining vestiges of

French - . in french we are doing lots of words. some of these words are big and some are small. the last unit was on la