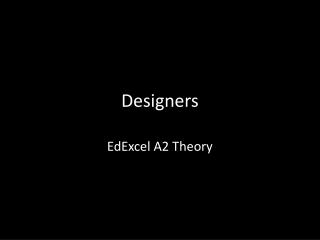 Designers. EdExcel A2 Theory. Characteristics in terms of design styles, philosophy and influences on design culture of the following designers and design movements: . William Morris and the Arts and Crafts movement Charles Rennie Macintosh and the Art Nouveau movement American Designers - . highest paid fashion executive in the us in 2001. self-taught designer of men’s tailored

Web Designers - We have range of web designers in expertness, from fresher level, professional level, and expert level so

Celebrity designers - Celebrities with their own fashion

Designers Research - . designers. what is the job of a designer? the designer meets the client to establish the design