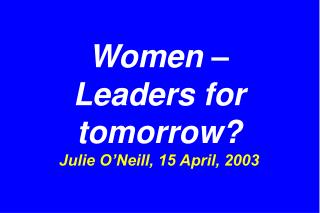 Women – Leaders for tomorrow? Julie O’Neill, 15 April, 2003. Why women make great leaders A bit about me What is changing in the world of organisations? What about women? What about leadership?. Me Currently the only female Secretary General of a Government Department Market Leader- Intermediate Unit 12: Leadership - 2. starting up. which modern or historical leaders do you most admire?

Building the DHS Leaders of Tomorrow - - . using the qhsr as a guide to employee training and curriculum development dr.

Flattened Classroom Today: Flattened Leaders Tomorrow - . what does “flat” mean to you? share with the people at

LwICT for K-12 21st Century Learning for The Leaders of Tomorrow - . the changing face of education. the illiterate of