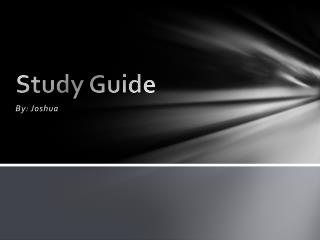 Study Guide. By: J oshua. S.C.A1.3.1 . Mass is a measure of how much matter is made of in a object. Volume is the amount of 3-D space used to describe the space that an object takes up. To Kill A Mockingbird Study Guide - . harper lee. chapter 1. 1. who is the narrator? scout 2. who is simon finch and what

BM3 STUDY GUIDE By SN Jamison Burkett - . what form is used when ordering new publications?. cg-4428. how do you request

Welcome to Full Body Presence: Grounding and Healthy Boundaries - Before we begin, please read pages 1-41 in your study

Georgia U.S. History End-Of-Course Test Study Guide - . what is the