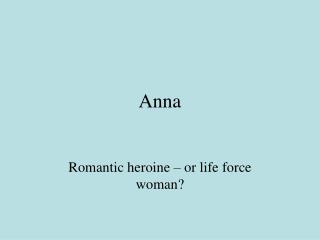 Anna. Romantic heroine – or life force woman?. Sophie Marceau as Anna. Anna and Levin. Like Levin, is caught in a struggle between her sexuality and moral imperatives. Anna’s Tropical Rainforest PPT - . by: anna v. what are some of the plant species that live in the rainforest ?. click

My Trip to the Zoo by anna - . i suall snaks.the are cool.i lik snaks. i sall a ellafint.a ellafin has big eirs.i lik