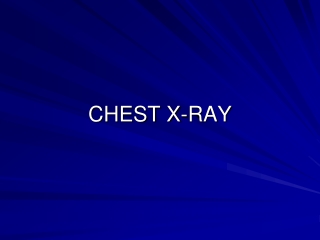 CHEST X-RAY. The plain CXR is the most commonly performed imaging exam because: Cardio-pulmonary disease is common The exam is quick, easy to do, cheap, with low radiation exposure (a PA CXR gives only about 3-days-worth of radiation exposure we get anyway from natural sources) Chest X-Ray Interpretation - . for beginners. why take x rays ?. how are chest x rays taken ?. what do they show ?. rules

The Chest X-Ray - . dr mohamed el safwany, md. intended learning outcome. the student should learn at the end of this