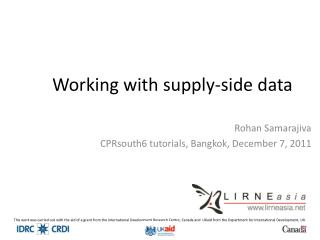 Working With Data - . mode, median, range and mean. data. data are numbers that you collect that tell you

Working with Supply and Demand - . price ceilings. government-imposed maximum price that prevents the price of a good

SUPPLY SIDE ECONOMICS - . alternative to keynesianism response to the “ stagflation ” of the 1970s – both high

Supply-Side Economics - . objectives of supply-side policies. these policies focus on shifting lras to the right in order

Supply Side policies - . supply side policies aim to…. improve the efficiency of factor markets, to boost productivity

Supply-Side Policy - . fiscal and monetary policies focus on the demand side of the macro economy. these policies shift

Supply Side Economics - . does this really work?. what is the purpose of income taxes?. supply-side economics. orthodox