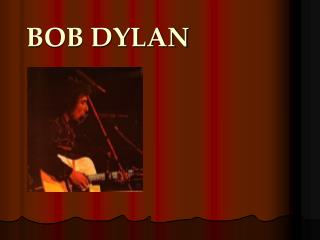 BOB DYLAN - . “a man is a success if he gets up in the morning and gets to bed at night, and in between he does what he

Bob Dylan - . biography. robert allen zimmerman was born in 1941 in duluth, mn. when he was six years old, his father

Bob Dylan - . not bob dylan?. from rob to bob. bob dylan’s popularity rose after his name change from rob zimmerman.

Bob Dylan - Early life. early music. music career. bob dylan. “all i can do is be me, whoever that is.” ~bob dylan.

Bob Dylan - . by peter wagner. why bob dylan?. he’s influential i like his music he’s a cultural icon to learn more

Bob Dylan - . by mahaliah and meghan pedables. b orn in duluth, minnesota in 1941 under the name robert zimmerman from a

Gotta Serve Somebody by Bob Dylan

Masters of War by Bob Dylan - . joseph flynn. this song criticizes the us government for sending teenagers to the war in

Bob Dylan “Blowin in the Wind” - . warm-up questions 1. many pop songs are about love and romance. what are some