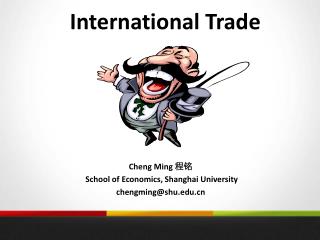 International Trade. Cheng Ming 程铭 School of Economics, Shanghai University chengming@shu.edu.cn. Introduction. Importance of foreign trade -- one of the backbones of the growth of the economy -- ties or linkages with the world -- important political means INTERNATIONAL TRADE - . trade theory focuses on three basic questions: a) what products to import and export? b) how much

International Trade - . “made in china”. what you should learn. the principal foreign trade agreements comparative

International Trade - . what is an export?. what is an import?. how much is traded?. year exports imports difference.