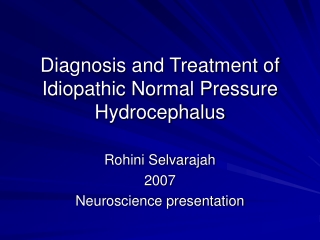 Kawasaki Disease: An Update of diagnosis and treatment - . what is kawasaki disease?. idiopathic multisystem disease

Hydrocephalus - . hydrocephalus is a condition where there is an imbalance between the production of cerebrospinal fluid

Be Careful About Your Feet and Foot Pain Treatment - Are you experiencing foot pain? then you probably know that there is

Idiopathic Pulmonary Fibrosis - . objectives. know the definitions of ild, iip, and ipf. understand the pathogenesis of

Hydrocephalus - . background. what is hydrocephalus? abnormal accumulation of cerebrospinal fluid in the ventricles of

Prostate Cancer Prognosis Treatment - We can suggest the best treatment for prostate cancer, our surviving rate of the