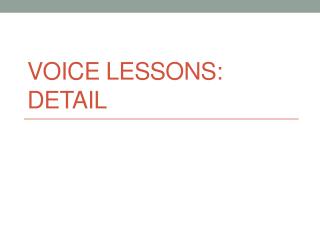 Voice Evacuation - . an introduction. please note: this presentation has been formatted to enable easy download and email

Out and About with the CIDOC CRM: The Lessons and R esults of the CRM Dissemination and Training programme - Stephen

Voice evaluation - . topics. definition of the terms assessment, evaluation and diagnosis the screening process for voice

Michigan Osteopathic Association “The voice of the osteopathic profession.” - . one of the largest osteopathic state

Structure and Function of Larynx - . some questions. what is a voice disorder? how does it differ from speech disorder?

Analyzing Voice in Literature - . diction (word choice) is the foundation of voice and contributes to all of its elements

APA Formatting Tutorial - . ohio christian university “does not wisdom call out? does not understanding raise her