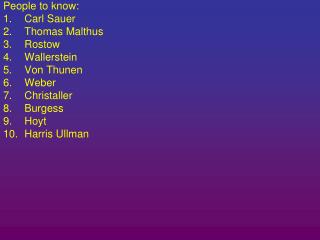 The Von Thunen Model - . ap human geography. review: what is a model?. models are examples that help us better understand

Thomas Malthus - . in the late 1700’s, a british economist thomas malthus concluded that the rate of population was

Thomas Malthus - . by: cody able. general information. born in february 1766 died in december 1834 he is from the united

Thomas Malthus v . The Green Revolution - . the 2 nd agricultural revolution. turn to a partner and discuss the answers

Von Thunen Model - . for some reason really important to the ap folks. the model. von thunen observed some patterns in

THOMAS MALTHUS - . malthusian and neo-malthusian theories. who is thomas malthus and what did he predict?. what factors

Models Of Burgess And Hoyt - . ib sl. burgess. explanation. having made in depth studies of the morphology of chicago in