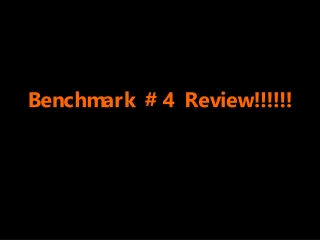 Benchmark #4 Review!!!!!!. Which of the following was an abolitionist and spoke out for women’s rights?. Harriet Tubman B. Frederick Doulgas C. Sojourner Truth D. Harriet Beecher Stowe. Sojourner Truth. What territory did the U.S. acquire as a result of the Mexican War?. California Texas Benchmark: - Sc.8.l.18.4  cite evidence that living systems follow the laws of conservation of mass and

Benchmark - . study guide. what is happening to the aral sea. formerly one of the four largest lakes in the world with

Benchmark - . add benchmark to april 3 on the calendar. similar to the midterm, it will assess your knowledge of american