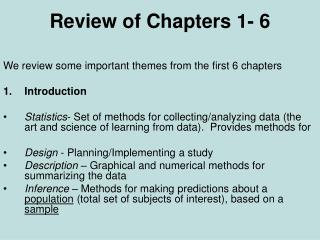 Review of Chapters 1- 6. We review some important themes from the first 6 chapters Introduction Statistics - Set of methods for collecting/analyzing data (the art and science of learning from data). Provides methods for Design - Planning/Implementing a study Chapters 6-11 Review - . true or false. your ability to make sound judgments is the 1 st thing to be affect by drinking

Review 1 Chapters 1 - 5 - . chapter 1. explain why it is essential to learn about computers today and discuss several

Chapters 1 - 4 Review - . the student will learn more about. some of the ancient numeration systems. sexigesimal system.

Review Chapters 1 - 3 - . instrument currency. “to act as pic of an aircraft on an ifr flight plan, one must have

Chapters 1-4 Review - . by april senger fos. what do we call an educated guess?. fact law theory hypothesis. what do we

Chapters 4 and 6 Review - . chapter 4. what are the units of mass? what is the difference between mass and weight? what

Chapters 1 and 2 Review - . 1 . what do we learn about hassan’s personality? 2 . how would you describe amir’s