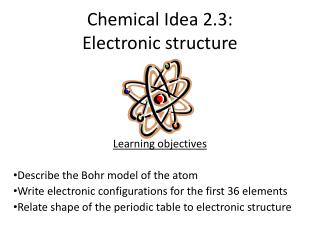 Drawing the structure of polymer chains - Electronic structure of conjugated polymers. this chapter is based on notes

Atomic Structure: The Nucleus Chemical idea 2.1 - . learning objectives describe structure of atoms explain and use the

TEXT STRUCTURE - . text structure refers to the organizational patterns that are used by authors to present their ideas

Big Idea: - Counting atoms in compounds or molecules. big idea: given a chemical formula be able to count the number of

Unit 5 The Structure of Matter - . chapter 17 the elements and the periodic table. 17a – a brief history of the

DNA STRUCTURE - . unit 2: molecular genetics. dna is the hereditary substance!!. dna is the winner!. video: the

Electronic Structure of Atoms - . chapter 6. introduction. almost all chemistry is driven by electronic structure, the