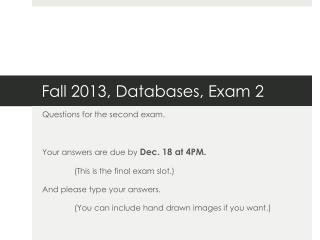 Fall 2013, Databases, Exam 2. Questions for the second exam. Your answers are due by Dec. 18 at 4PM. (This is the final exam slot.) And please type your answers. (You can include hand drawn images if you want.). 1. Cassandra.

FALL SEMESTER 2012 Semester Exam Review - . why did the policy of treating the great plains as a huge indian reservation

Isolation in Relational Databases - . chapter 24. what’s different about locking in relational databases?. in the

FINAL EXAM REVIEW CHEM 1411 - . you will need to bring a picture id. pencils and calculator (nonprogrammable). the exam

HAPTER 4 - . relational databases. introduction. questions to be addressed in this chapter: how are databases different

HAPTER 4 - . relational databases. introduction. questions to be addressed in this chapter: how are databases different

Fall Final Exam Review - . esps. principal thomas notices that every time it rains there are worms on the school parking

ABR Exams of the Future - . examination details impact on training. core exam in diagnostic radiology. will be given